The Friends of Mount Majura (FoMM) are a group of volunteers who work in close collaboration with rangers of the ACT Parks and Conservation Service to protect Mount Majura’s rich biodiversity including critically endangered Yellow Box - Red Gum Grassy Woodland and a range of rare and threatened plant and animal species.

We host working parties on the third Sunday each month at various sites within the Mount Majura nature reserve and welcome volunteers to help with tasks such as mapping pests, weed control, planting of local species and caring for the plantings, collecting seeds and controlling erosion.

The work parties typically start at 1pm from April to September and at 9am from October to March and last for 3 hours. All volunteers decide themselves how much time they wish to contribute and there is no obligation to ‘complete’ set hours.

Volunteers need NO prior experience in conservation as we provide ‘on the job’ training and learn new skills together and collaboratively.

All you need to bring is your interest, appropriate clothing (long sleeves and pants), sturdy shoes, sun protection and drinking water. We will provide tools and equipment as required.

FoMM also holds weekly work sessions in the nature reserve east of the housing estate “The Fair” in North Watson and from time to time organises expert-guided walks on various topics.

Further details including our monthly newsletter and information on meeting points can be found on FoMM’s website at www.majura.org. 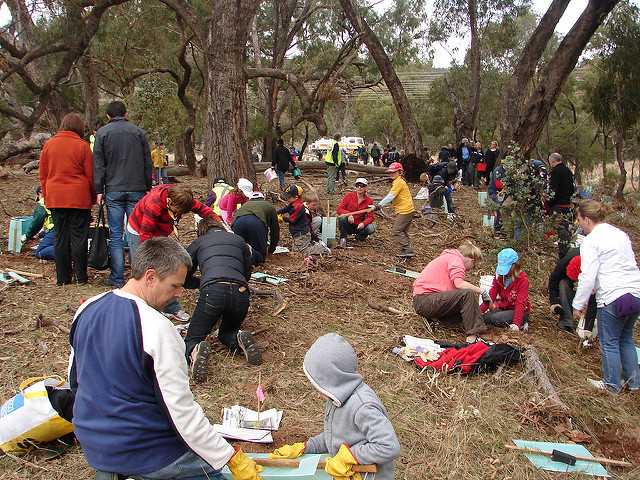 The main work focus of FoMM since establishment in 2003 has been to attempt to improve the critically endangered Grassy Woodlands of Mount Majura. This has proven challenging due to the overgrazing pressures from local kangaroos. The kangaroo population of Mt Majura and Mt Ainslie is significantly larger than what is often considered sustainable for the type of vegetation communities.

The Friends of Mount Majura contribute enormous volunteer efforts each year, often several thousand volunteer hours per year, up to around 5000 hours per year during a number of years in the late 2000s, however the condition of the forests and remnant grassy woodlands is steadily deteriorating.

Much of the native ground cover diversity has been lost which includes many common grass and forb species. The cycle of drought and overgrazing has led to the intrusion of exotic species such as plantain that have replaced the native tussocks in the lower grassy ecosystems. Where exotic species are less prevalent, the loss of groundcover has led to bare soil, erosion and the loss of topsoil.

Parts of Mt Majura are now proving difficult to repair because plants are sometimes unable to root in the exposed, soil diminished ground. In the mid to the late 2000’s, the ecosystems of Mt Majura still showed remarkable resilience to adverse conditions. For instance in 2005, after several years of below average rain fall the native groundcover recovered with an explosion of native grass and other flowering herbs. Just over 10 years later this recovery is proving more challenging.  FoMM volunteers, who work on a number of project sites have observed a sharp downturn around 2013 and suspect this may have something to do with the local kangaroo population.

We are concerned about the challenges which are presenting themselves in modern conservation management including herbivore control and the impact of our recreational users.

This activity has the following schedule