Friends of Mount Painter carry out work that supports the Parks and Conservation Service’s management of the reserve. We hold monthly work parties on the third Sunday morning of every month and organise occasional other activities. For those who are unable to come to the monthly work parties and/or are extra keen Landcarers, we also work at other times in small groups or individually.

The monthly work parties generally start about 9am and finish at 12.30pm, but are varied earlier in mid summer and later in mid winter to match expected temperatures.

Please wear sturdy footwear and clothes to protect you from the sun. And bring some drinking water, a mug and some food to share for morning tea.

For more information, contact us at friends.of.mount.painter@gmail.com or Sarah Hnatiuk on 0424 263 565. Other information is on Friends of Mount Painter’s Facebook page.

Please note that the time of these work parties can change, email the group directly or call Sarah Hnatiuk for confirmed times.

For more information contact Sarah Hnatiuk on 0424 263 565 or at friends.of.mount.painter@gmail.com 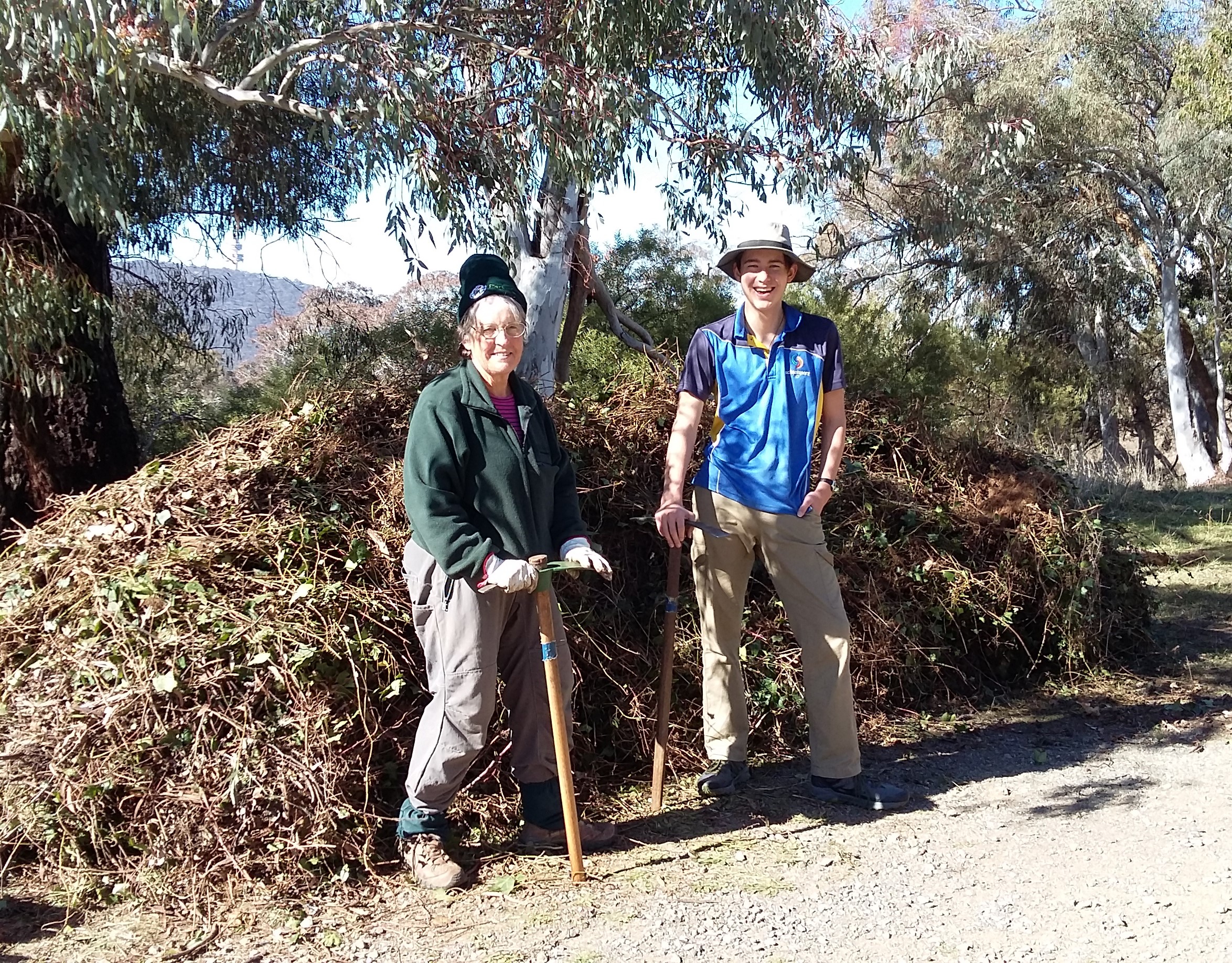 The Friends of Mount Painter have had a busy year. In April 2018, a prescribed burn in the Wildflower Triangle section of the reserve removed the dry grass and litter that had accumulated over many years in a patch of grassland there. A post on our Facebook page alerted ABC radio to the event and FOMP’s role in Parkcare; the result was a segment on radio and an item on the ABC News web site

Since the burn, we have watched with interest to see what native species might emerge once they were no longer shaded by dense grass. We have found 20 species, many of which we did not know were there. We have also been able to activate a plan to improve the grassland’s condition that we drew up several years ago with Craig Wainwright. This involved spraying the exotic grasses as they re-sprouted, to give extra space to the Kangaroo Grass and Poa Tussock. In a large patch of sprayed-out Paspalum, we planted grass and lily tubestock provided by Greening Australia, with funding from Evoenergy’s Tree Planting Fund. We continued our focus on grassland restoration by adding to last year’s planting on the north east slope of Mount Painter; Narrow-leafed New Holland Daisies are boosting the small existing population. And finally, we enjoyed more grassland planting at our annual, joint work party with Friends of Aranda Bushland.

We have pursued our weeding program as always, adding to it this year the removal of a large patch of ivy. We much appreciated help from groups from Telstra and KPMG who came to us through Ginninderra Catchment Group and Landcare Australia. They removed many rather large Sweet Briar bushes and helped dismantle old fences. The group from Telstra came with a request that an Indigenous element be included in their day on Mount Painter, so we worked near the canoe scar tree and ate our lunch beneath it, while Wally Bell talked to us about Ngunnawal culture and his people’s former way of life.

Monitoring various aspects of the reserve’s plants and animals has continued with our participation in Frogwatch, Vegwatch, and Conservation Research’s annual kangaroo count. At the Woodland Forum in June, Sarah Hnatiuk reported on the survival of tree and shrub tubestock planted on Mount Painter which FOMP has followed since 2005. We also contributed a poster showing what we have found to be the best way of planting tubestock to maximise their survival and growth.

On a couple of occasions this year, we have displayed information about Mount Painter Nature Reserve and our work on it. In addition to our usual, annual role alongside other groups in a display at Jamison Plaza, we had a stall at the Celebrate Cook Festival held by the local supermarket to mark Cook’s 50th birthday. This festival attracted several thousand people, a constant stream of visitors to our stall, and 29 people asking to receive our notices and newsletters. We also connected to the wider community through an autumn bird walk with Nicki Taws, a grassland walk to see what was regenerating after the burn, and the annual visit by University of Canberra students studying the connection between geology and vegetation.

In November, Sarah Hnatiuk joined other Parkcare Convenors at a meeting with the ACT Minister for the Environment, Mick Gentleman, at which we raised a number of issues of concern to Parkcarers. These included the need for another Parkcare Ranger to assist Parkcare groups, the important role played by the catchment groups, and the long delay in the production of an updated plan for Canberra Nature Park in which, we argued, it is imperative that conservation be the overriding management priority.

We thank all those who have helped FOMP’s work in 2018, especially Parkcare Rangers Phil Selmes and Marty Bajt; Michelle Nairn from Mitchell Depot; and Alison McLeod.

This activity has the following schedule